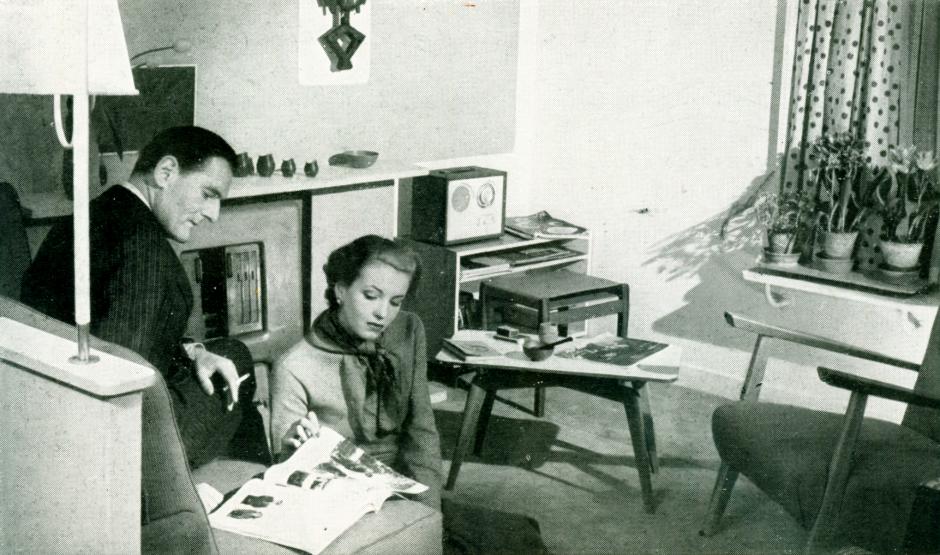 Yes, I agree the picture is not "typical" of the times but or an "ideal home" advert for modern living.
Most people were still living with handed-down furniture and making-do.
Our family would have been considered lower middle class I suppose as my father had recently secured a managerial post. In the mid 50's when i was about one year old, my parents managed to rent a house with two sitting rooms.
They had no money to furnish the front room and it stayed completely empty for a number of years. Every Sunday their two arm chairs, a small square table and the mains table radio were moved into that room and after Sunday lunch and we spent the afternoon and evening in there. After I went to bed, the furniture and the "wirless" were moved back to the back room and we spent the rest of the week there.
This was still going on when I was about seven and they got their first tv. That was moved into the front room on Sundays but they had managed to buy a there piece suite by then.
We had a coal fire in one room only (front room on Sundays!) and the paraffin heater in the hall. It had to heat the hall, stairs bathroom and three bedrooms! Ice on the windows and no loft insulation. My bedside table was a wooden orange crate.
One memorable event was the purchase of a single bar electric fire which went on the landing on really cold nights and in the bathroom with a long taped-up flex and a big two-pin plug (!!!!) on bath night to stop the icicles forming!

This is about as typical of an 'ordinary' British family home in the 1950s as is the set of the glossy stylish American series Mad Men! This photograph demonstrates new furniture and new design products that were only just becoming available to purchase. The idea that a 'typical' family could immediately rush out and furnish their home top to bottom in this style is quite ridiculous: a typical home in the '50s would have included a mish mash of inherited furniture, bottom drawer items and nicks-nacks dating from the 1920s, 30s and 40s.....

I was born in 62 and we were possibly the first generation of houseproud families. My mother was very houseproud and had us take off our shoes at the door to protect the carpets. We had slippers to wear. No choice in the matter, shoes came off and slippers went on. same for all my friends. If we got caught wearing shoes in the house, oh boy there was hell to pay.So maybe the 60s was the birth of the houseproud generations. And I still follow my mothers rules. No shoes allowed in our house, slippers on please. Old habits die hard