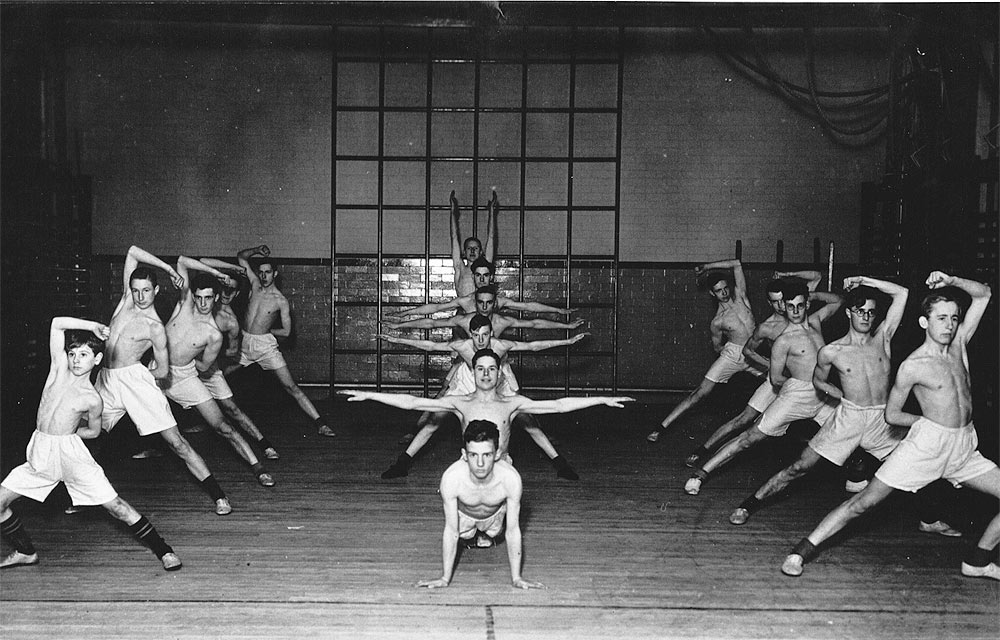 Bernard and Roy, I agree with you. To describe compulsory showers as abuse trivialises child abuse, and having to do something you would rather avoid has advantages. Aged 11 I would rather not have had nude showers with a lot of other boys. Luckily we had no choice. I quickly got used to it, became less shy about my skinny body and didn't mind stripping for gym, swimming or showering. By having to do things I thought would be difficult I found I could cope with more than I thought - a good lesson for life.

Roy is, of course, quite right - showers have nothing to do with child abuse. I'm sure we all had to do things we didn't enjoy at school but not liking something does not make it abuse.

Showering after PE and games is a matter of personal hygiene and has nothing to do with child abuse.

30 years ago the nightmare of compulsory physical education ended for me. It is time we ended forced showers in school. I can't believe with the passing of the Children Act in 1989 some schools still mandate this state sponsored child abuse.

A modern day example is shown below

At-shirt appropriate to your child's "house", which is available from the office, priced £4.00

A towel and a change of socks are required for every P.E. lesson

A P.E. bag is available from the school office, priced £2.50

All students are expected to shower are a P.E. or games lesson.

Good for you Dave. So do I still wear one under shorts.

Hi all, when I was at school we also had the no underwear under shorts rule which was enforced until the middle school aged 15/16 after which we could wear something,most of us started to ether use snug briefs, swimming trunks or a jockstrap for support, I started off with trunks but quickly moved on to a jock initially for cross country running but then for all sports and activities.
I continued to wear one at school then college and still wear them now under shorts.

When we boys entered the 6th form we were advised to starting wearing a jockstrap. A few of us went together to buy one at the local sports shop. We felt really grown up and "manly". We continued to wear them at all sports even after leaving school.

I agree with Chris that they are great to wear under shorts in hot weather. Much better that sweaty briefs. In fact I have just bought 2 on line to wear this summer. I may be old fashioned but hopefully will be comfortable.

Chris G
Yes, my husband will only wear a jockstrap for running and tennis ... nothing else does the job ... to paraphrase him :=)

June, funny you should mention tennis, as my first experience of wearing a jockstrap for more than a couple oh hours was when we had an all-day tennis tournament at school. Much more comfortable than clingy sweaty cotton briefs on a hot summer afternoon!

Only to reiterate what June says, and that is that a jockstrap's chief purpose is that of a genital support - l can vouch for that as can many other school boys and men

Hello Andrea
A jockstrap can be used to hold a cup for protection against a kick or a hard ball, but its main purpose was as a very satisfactory genital support used in any sport be it running or tennis ... my boys typically possessed two jockstraps, a standard jockstrap without a cup pouch, and one with cup for games like cricket or field hockey.

When he was in the 3rd year at secondary, my Ex and his classmates were told by their PE teacher that wearing a jockstrap would reduce the chances of them 'doing themselves an injury' now they were starting to mature.

However I wouldn't have thought a jockstrap alone would offer much protection against a kick in that area!

Alfie, the kit we wore indoors was perfectly fine of course girls were allowed and expected to wear a tee shirt but us boys didn't care. The girls were also barefoot.

Ross, although you changed separately from the girls was doing mixed lessons in the kit you describe ok?

Personally, I cant remember anyone mentioning jockstraps to us so we managed without all the same, with just shorts and pumps on. Incidentally, I presume when people say 'pumps' they mean plimsolls?

Was anyone told the reason why underwear was banned?

Alfie, middle school was ages 9 to 13 and all PE was in mixed lessons and yes we had separate changing facilities. In reality the rule wasn't enforced and was there for hygiene reasons.

Chris G
You are right in that a good PE master would advise on the dangers of going commando and to wear either supportive underpants or a jockstrap.

Secondly, my boys' classmates wore a jockstrap in preference to briefs, not only for PE but for all games. My understanding is that most men who've worn one see the value of a jockstrap.

Ross
what age range was the middle school. Was PE a mixed lesson or separate and if mixed did you have separate changing facilities as you had to remove underwear

Chris G,
We switched to topless PE in second year of Junior School, my older brother was already doing topless PE at Senior School which I was aware of. It made the transition to Senior School PE easier by already being used to being stripped to the waist. At Senior School we were not allowed to wear any underwear for PE, only shorts and pumps and it was never suggested that we should purchase a jockstrap. It seems that topless PE was being introduced in many schools when we were at school, Education advisors must have decided that this would be better for boys and I personally agree with them.

Jockstraps were never a thing in my school years. Probably quite the opposite and in middle school we were told to remove our underpants. Our indoor kit was white shorts, shirtless and barefoot. Outdoors we were allowed a rugby shirt and boots when required.

We didn't have to go without underwear for PE at secondary school, but most of us did. At some time in my third year there, just after we switched to going topless, one lad got kicked in the "privates" during a rather boisterous team game session, at which point the PE master warned us about the dangers of going commando and advised us to either to wear supportive underpants or a jockstrap. I do'nt think any of us had ever heard of such a garment before, and none of us owned one at that point.

I didn't get one until a few years later, when I moved to another school for my 6th form years, and found that most of my classmates wore them in preference to briefs, not only for PE and games, but also as everyday underwear in hot weather.

Andrea - Jockstrap was on our school games kit list.

Rob - Yes we showered naked (how else would you shower!).

Dan, same with me; jockstraps were never mentioned at school and certainly not by our PE teachers and we had to continue wearing our shorts with nothing underneath until we left after sixth form. That was the way things were and we just accepted it and got used to it and I'm also sure no-one suffered in any way as a result. After all we were all boys and saw one another completely naked in the showers after each PE lesson. Dan,did you have to shower naked after PE and also take your jockstrap off?

Dan,
Your experience sounds the same as my Ex. He said their PE teacher advised them to purchase a jockstrap at the start of their 3rd year.

Was this how you were told, or did they appear on a uniform list sent home to parents?

Dan - No-one ever mentioned jockstraps at school - I didn't know what one was until some while after I left school. We wore just our shorts with nothing underneath - it was just the way things were and I'm sure no-one suffered as a result.

Rob, Alan, Alfie A and others, why didn't you wear a jockstrap?
We were not allowed to wear pants but jockstraps were worn from 3rd form onwards.

I can remember the'ritual' of the jockstrap at school. Think overnight each and every boy had bought one ... another stepping stone toward manhood. Gosh how times have changed! Lord knows what ritual modern day kids follow today. But it was fun and simple in our time!

I agree with John but I have seen 'somewhere' a comment that making boys do gym shirtless is tantamount to child abuse. I've also come across a remark about a lady who saw two 11 y.o. boys going to school in shorts on a warm day in October and reported the mother to Social Services for 'child neglect'. (I don't agree with either of these commemts, BTW!)

Rob,
‘The tide comes in, the tide goes out’, I think that over time things may change again. Throughout the history of mankind nothing stays static, it may take a long time. I still believe that wearing shirts for gym should be optional for males and not compulsory.

I agree that it is much healthier being bare chested while exercising but sadly I can't see any way that PE lessons could return to the way most of us remember. From the start of our first lesson we had to strip off completely and wear just shorts and plimsolls. We never wore anything on top and it felt great being able to sweat freely in the gym and also running around outside and enjoying the fresh air. I felt decidedly hesitant at the end of first lesson about having to go naked into the open communal showers but quickly overcame my inhibitions leading to an increased level in my confidence.

Andrew,
Exercising shirtless is a healthy and natural way for males to exercise. I don’t see why lads cannot be allowed to do Physical Education shirtless if they want to. Having done PE with a shorts and shirts rule and a shorts only rule, I would always choose to be shirtless to exercise.