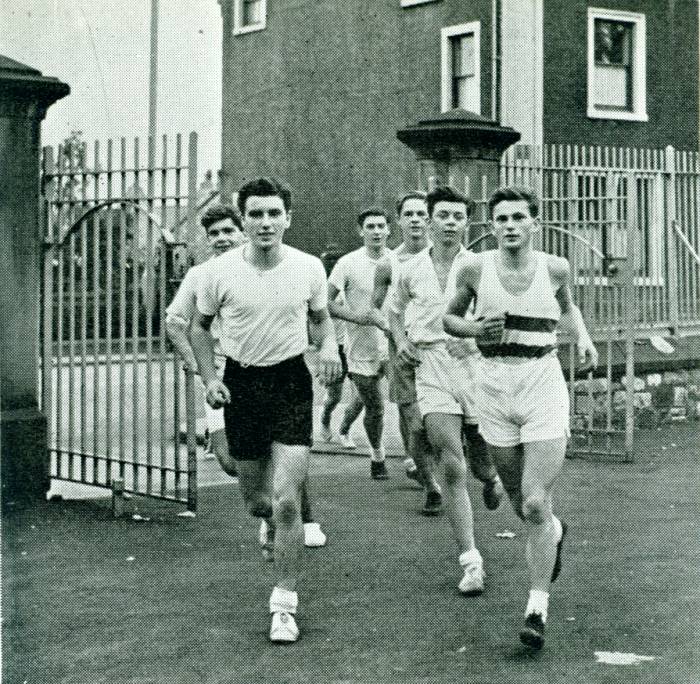 In those days there was more discipline in school and if told to do PE stripped to the waist you did it and didn't get stroppy.

I agree with David. Being stripped to the waist certainly toughened you up.That is what youths need today.

I think that in the fifties and sixties most boys accepted that you did P E etc stripped to the waist whatever the weather both inside and outdoors.

I also did cross-country stripped to the waist and barefoot.As our school was in a built up area we ran through the streets so that passers by could see us.No one was bothered by that.Many of the sixth formers were quite muscular with well developed shoulders and chests and some of them had hairy chests as well.

Did cross country shirtless, too. Just like the boys in this photo;
http://ecol.org.uk/loftus/wp-content/MAX/2011_04/scn_048.jpg

Several postings have mentioned that they had to run cross county shirtless, and sometime with bare feet as well, and I think this was fairly common across most secondary schools in the 60‚Äôs/70‚Äôs.

I wondered what the general reaction among boys to being restricted to minimal kit was, especially in cold or wet weather.

Even when allowed to wear a shirt or plimsolls indoors, like a number of boys I had chosen to just wear shorts, but still I wouldn‚Äôt have chosen to run outdoors stripped to the waist (except maybe on a very warm day), or with no shoes on in any temperatures. In reality we had no choice, but it was still something I hated, especially having no shirt on if it was cold or raining.

When we were first made to strip for cross country, one of my classmates was very, very upset, and pleaded with the teacher at least to be allowed to wear a top, but to no avail. He was one of the very quiet lads, who was very bright, but pretty useless at sports, and hated PE/games.

Next week when we changed, we all just put on shorts only, having accepted what was going to happen, but he put on both a shirt and plimsolls, only to be told, in no uncertain terms to take them off. By now he was in floods of tears, which didn‚Äôt get him anywhere, as you might guess. In fact, all it achieved was to make him a ‚Äúvictim‚Äù for various punishments in future PE lessons, and over time he clearly had to accept running stripped off, but clearly he hated any kind of PE/sports, and probably still does !

I wonder if other boys had similar experiences.

I went to a boys only secondary school in the early 70‚Äôs.

We had PE twice a week, one lesson indoors in the gym, and the other cross country, additionally we had a games afternoon each week. Cross country took place throughout the year, irrespective of the weather or temperatures; we had a 4 mile course across fields, woodland paths, and a couple of streams.

The kit we wore depended on the teacher. Thus in year 1 for indoor PE we were allowed to wear white shorts, vest and plimsolls (although a few boys went without the top, with some also barefoot), for cross country we wore rugby shorts, rugby shirt, plimsolls and socks.

In the second year we had a new teacher, who came from a different school. He had his own views on what kit boys should wear, and at the first PE lesson, told everyone to strip to the waist, and take off our plimsolls, so we wore just shorts, nothing else. We had the second PE lesson on the Wednesday afternoon, and everyone brought their usual rugby shorts/shirt. It was possible from some classrooms to see boys setting out on a cross county run, and we noticed that they were all running shirtless, soon we were to find out why.

We changed for the lesson, and he immediately told us that for his cross county lesson he allowed only shorts, thus we all had to strip to the waist, and worse, take off our plimsolls and socks, as everyone had to run barefoot. So we all did cross county shirtless and barefoot from there on, even if it was freezing cold with a biting wind which froze you immediately you stepped outside the gym.

Never mind we had a nice (usually cold) shower to look forward on our return !

I agree with Dave and always stripped to the waist not only at school for P E but when playing in the street or the park etc.

Being stripped to the waist caused me no problems.If you are a boy you strip to the waist as often as you can.No big deal

Like Roy and others I had to do cross-country stripped to the waist.It was quite enjoyable in the summer terms when I was usually bare-foot as well but you had to put up with it in the winter and eventually you got used to it

I'm glad I'm not the only one to feel that it is normal for boys to be stripped to the waist at all times for P E etc.

In addition many boys normally would be wearing jewellery including not only a wristwatch but also necklaces such as a cross and chain or a St.Christopher medallion.Some masters allowed this but others made them remove them.

In the sixties we did cross-country stripped to the waist and barefoot.We mainly ran through built up areas near to the school and many locals were watching scores of bare-chested youths(some sixth-formers had hairy chests) running through the streets with some shouting comments at the youths

Like Alec our cross country runs were performed barechested. Personally I didn't find running in the rain too bad, it was the snow where I struggled. If we didn't perform to the teacher's expectations we were taken out of a lesson to be given either laps of the field (anything between 10-15 laps being the norm), or a fitness session outdoors. Obviously punishments were done with your vest off and could be quite brutal during a freezing winter.

Like Robin I suffered a similar cross country experience. However we were compulsory shirtless (year round in Scotland). I can still remember the cold getting right into my bones. Running shirtless in hailstones and almost gale force wind was sheer torture and extremely cruel. Sleet or heavy rain and driving wind was much worse than falling snow. Although I don't recall running in heavy falling snow. Snow, ice and wet grass soaked through the thin plimsolls as soon as we left the unheated changing rooms. (I recall boys getting chilblains frequently) This had the effect of making our feet begin to freeze while the cold wind lashed bare legs and torsos. We wore no underwear and the thin shorts offered little protection. The showers were often freezing (The actual pipes bursting upon thawing)and never trully warm. CP in the form of Slipper weilding P.T. teachers and the daily queue for the Cane outside the Vice Headmaster's door completed a trully horrid experience.

Our school cross country course was 4 miles long, and included surfaces of grass and earth, passing through woodlands and open country, and included hills, flat ground and gravel roads. The cross country season was from immediately after the Christmas holidays until February half-term, and included weather conditions of rain, sleet, snow or hail, and a wide range of temperatures.
Cross-country was run in our outdoor PE kit of white shorts and white football shirt.
At the end of the lesson, everyone undressed for a communal shower.

how lucky were they! We were shirtless whatever thet weather