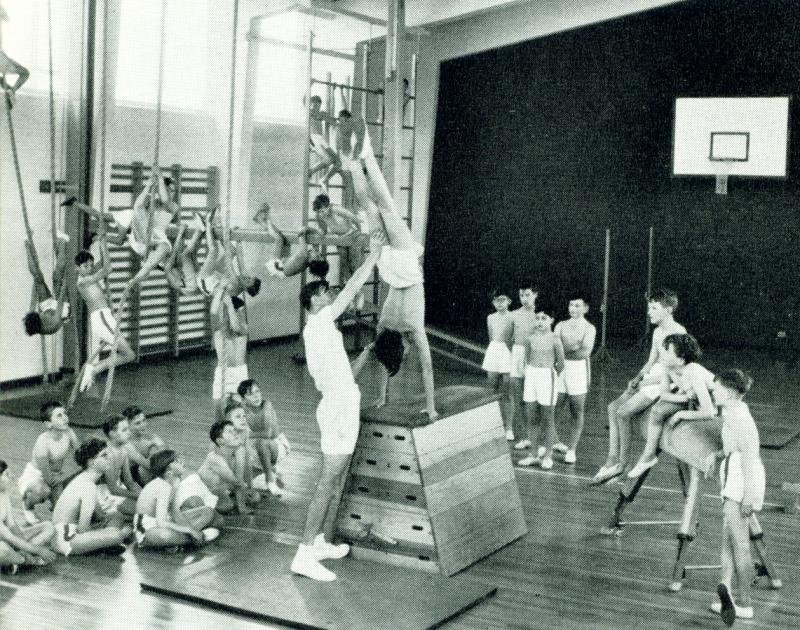 We weren't allowed to wear underwear and iany bo tried and was found out he received six strokes of the cane and had to do press ups outside for up to an hour while strtipped to the waist and barefoot.

Sid:- Yes I was allowed to wear briefs under my shorts.

Daniel & Mark follwoing on from most peoples comments were you allowed to wear anything under your shorts?

Like Mark although our uniform for PE was vest and shorts many lads didn't bother with a vest and went about stripped to the waist.Nothing was said and this meant that more and more of us started to do PE bare chest.

For the more recent readers I will repeat some of my previous messages of Nov &December 2011. We were told the reason for no underpants was for hygiene reasons. In more detail, We were advised that we would be working hard during pe & exerting ourselves & we had to have no pants & showers were to follow the lesson to prevent us sitting in subsequent lessons with sweaty underwear(how gross). However, as far as I can recall pe was usally the last lesson of the day so the reason were unfounded.
We wore very short shorts (compared today when track bottome seem to be the norm )& invariably white & left nothing to the imagination. But hey no one seemed bothered We were all boys & young men together. How times have changed. What do you think?

I have always wondered why the no underpants rule was so strictly enforced and it would seem univeral, it certainly was at my school and being caught wearing underpants always resulted in a sore bottom. Other rules were enforced rather less. Ideas anyone?

Similar to others, white shorts, bare chest and plimsols in the 1960s and early 1970s.

We wore shirts, shorts and plimsoles for regular PE. Punishment PE was help on tuesday evenings for lads considered deserving. It was circuits in the gym. An hour of hell. We had to be barefoot and barechest and the no underwear rule was strictly enforced, unlike regular games.
It was always followed by a long cold shower. Coach would observe to make sure we stayed under. Always felt sorry for the PE teachers son. He came by car with his Dad who made him do punishment PE every week.

I know that most of us who have left comments experienced pe in the 50's late sixties. I know things have changed with regards to pe kit inasmuch as nowadays it is tops & shorts & underwear allowed. I know that we were put through a strict regime, as many of us has said with cross country runs etc. but what of today is it easier. aAre the physical demands the same? Any present day students able to comment?

In the fifties and sixties I for one certainly did cross-country both stripped to the waist and bare-foot.Many of the other lads did the same.By the time we left school a few of the lads(myself included)had developed hairy chests and were quite muscular.

Judging by the comments posted here, it srikes me that a lot of you suffered under the cohort of ex military people who were recuited into teaching after the war. We had a few in our school who were definitely somewhat unhinged and fortunately for me were not part of the PT department. When I left school (all boys) aged 18 in 1972 things were becoming a little more relaxed and the last swishes of the cane were dying away (I can still feel it however!)
PT was still done much as we see in the photo, we had singlets and shorts with coloured stripes on the side, as juniors no underwear was the norm but I don`t remember it being a rule as such, after age 13 or so we all wore the old cotton Litesome jockstrap, again there was no rule, we just did. Communal showers were the norm as well and I don`t recall any problems.
When I look back, it was certainly pretty spartan, but on the whole it was a good time.

Back inthe 60's we were required to wear shorts and tennis shoes.NO underclothing was permitted, but a shirtcould beworn. You COULD NOT wear your street clothes to PE, and if you did,you were not allowed to pass on the course, but to strip off NAKED and do PE that way..Not many forgot their shorts and shoes because of being afraid to disrobe. I cannot remember of any time that the familyor school administration had any problem with that. And yes, this was an all male class, with no chance of women coming into this area.

Dave & Roy,
I have looked at most of the previous peoples comments & the only conclusion I can come to having read them, is that we are nearly all from the era when we were not so inhibited about our bodies. As you say rules were rules & that was that. I know my parents were told that we did pe with no underwear & no top. No one queried it. Furthermore, most senior schools were single sex so there was not the logistics of running separate classes for pe & no risk of anyone of the opposite sex seeing any one changing. As for showers one big open area with several shower heads & no worries about seeing each other undressed let alone without a shirt. It was all part of growing up. Nowadays boys are too inhibited.

I went to an all-boys school in the 19970s. Like the boys in the photo, our PE was always done stripped to the waist. It was no use "forgetting" kit to get out of the lesson because the teacher had a supply donated by boys who were leaving or who had grown out of theirs. The teacher in the picture is wearing a tee-shirt and socks whereas our teacher wore track pants and a tee-shirt and sometimes a tracksuit top. I always felt that what was good enough for us should have been good enough for him.

"I wnet with the family to a swimming pool of course teen boys just wear short. so what is the difference in doin pe this way?"

There is no difference.
Do they wear shirts for mixed swimming classes? No. That's why I can't see why boys are allowed to wear T-shirts nowadays in most schools for PE.

I am assuming teenage lads would resent it if they were asked to go bare top for pe these days. However, at the weekend when I wnet with the family to a swimming pool of course teen boys just wear short. so what is the difference in doin pe this way?

In my time boys were stripped to the waist for PE as soon as they started at junior school when they were seven.This went on until they left secondary school at either sixteen or eighteen.

GD:While still in primary school we used to see the boys from the nearby secondary school running bare-chested.We knew that when we went there we too would be stripped to the waist for games etc and we regarded it as perfectly normal.

Having read the various comments , i can tell you in the sixties our P E was shorts, plimsolls & nothing else. Our shorts were white & the teacher said so we could not wear anything underneath without it showing, bearing in mind we all wore briefs those days.

One boy tried to keep his pants on Fool! The teacher was not daft. On the whole we enjoyed pe & I think enjoyed the freedom of wearing less clothes bearing in mind that for the rest of the day it was strictly uniform blazers & shirts & ties & we were only allowed to remove blazers if extremely hot weather. Anyone else eperince this?

To Sid:-This was in the fifties/sixties and we worfe nothing under our shorts.We wore house shorts which were white.

To the 2 peopl;e named Mark, you say stripped to the waste for pe what era. I presume the pe kit was shorts & nothing worn underneath. In our school the colour of shorts was determined by the "House" you were in. White , Blue,Black. Were yours the same?

Yes Mark Smith I was bare-foot as well as stripped to the waist.

Mark Jones:-Were you barefoot as well as stripped to the waist?

Dave, T-shirt's aren't better. It's the designer clothes and PC brigade at work who'll tell you otherwise because they're making money. A vest, or better still, a bare chest are still the most effective tops. Boys, if given the chance would relish the opportunity to strip to the waist for exercise. It would also solve these "issues" (excuses!) once and for all.

At Junior school during the period 1957to 1961 pe mainly was indoors except for hot summer days & for boys was in vests(singlets) & grey school shorts which every boy wore irrespective of the time of year. However, the girls wore a vest & had to remove their skirts & do pe in their underwear. As far as I can recall, there was no complinats about the inequality between boys & girls de rigeur. That just how it was.

Secondary school was a different regime boys only school & pe was indoors & out depending on the weather, & was short tight white shorts (no underwear which would have shown through) & bare top, but we wore plimsolls with no socks. Finished off with communal showers. NO worries or thought about boys seeing each other naked. But it seems this is an issue for lads these days.

I don't think boys really care about having to be shirtless for P.E. so I can't see why most schools changed that. Even vests are vanishing from nowadays schools and they wear T-shirts for gym. Why T-shirts are better?